Adventures into Self Publishing: Part Three 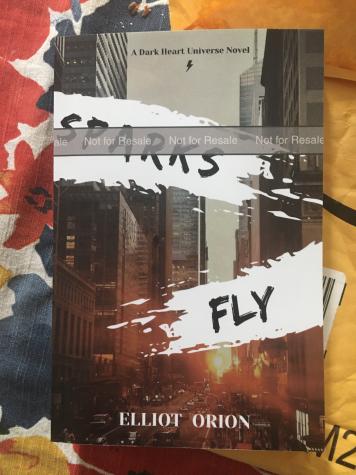 Quick note on the photo - the bar will not be there on your copy, it's just because it's a proof copy!

So much has happened since I last made an update post, so get ready for an eventful one today. To start with... I got the proof copy!! It is SUNNING and it's absolutely crazy to be holding my book in my hands. It's beautifully printed, the cover is gorgeous, and everything turned out wonderful. I had to make some minor changes, just adding some blank pages and extending a few graphics, nothing major. Still took me four hours to do them all, but that's alright, it was completely worth it. I've got the preorder for the Kindle version set up now too, which is very exciting. All but one of the items for the giveaway I'll be doing over on my Tumblr blog, starting June 29th, have come in, and they all look stunning. I'm so excited... But so nervous.

Which is part of why I've postponed the launch. I know, I know, it's a dumb reason to postpone, but give me a minute to explain. When I changed it, the majority of the items and the proof hadn't arrived yet, and there was no sign they were coming any time soon. With COVID-19 shipping delays in my country, delivery predictions for most of them were June 25th or so, two days after I needed them. With zero wiggle room if something wrong happened, too. I hadn't gotten the proof, and I had no idea if I'd need to do a total rehaul. The cover photo could've been too blurry when printed. The text could be entirely off-center, something that took nearly a day to get where I needed it in the first place. Everything only came in late last night, long after I'd changed things.

And then there was the matter of the launch party. A lot of things were making me uncomfortable about it. I'd done a survey to see what people wanted, with just any idea I could possibly think of. But when it was clear what people wanted, I realized I was not comfortable with some of them. One idea was a workshop on self-publishing, but this is my first book, so how could I pretend to be an expert? I handled this whole adventure like I handle writing the first draft - with no plan, no idea what I'm doing, just charging at it full steam ahead and hoping it worked out. Maybe with my second book I'll be able to do a darned workshop. There were other things I was uncomfortable with, like the Zoom call Q+A people voted on. I barely get interaction on my Tumblr blog, and this is my first book. What questions would people want to ask me? Since I realized I didn't want to do more than half the activities I'd planned, and I realized a whole week was too long for me, I had to rework... everything.

Which was reason two for the delay. The final nail in the coffin was simply my schedule. I'm a busy bee the next two weeks, even without this thing. I'm visiting my Nana, which would be two days with no wifi to do work, I have a study I'm participating in, and a bunch of appointments. Pushing the launch party off to next week, when I'm slightly more open, was the best idea all around.

So yes, the launch party is now starting June 29th, with the book release on July 4th. There's the small problem of me starting up work again somewhere around July 1st (I don't have hours yet). But I'll be able to manage it just fine with my typical hours. Anyways, most of the launch week is prescheduled in the queue! I'm not too happy about it, especially now that everything is in and I know it's less dire than my perpetual pessimist brain thought it would be. It's the best course of action, though, and I'm alright with this new development... even if it means two more weeks of being asked: "so where can I buy it now??" and being anxious over the whole thing. It'll be fine, and I'm genuinely more comfortable with things this way.

A lot has changed, as I said, but really, not much has in the grand scheme of things. The book is coming, the launch week is still happening, albeit shorter, and everything's still going wonderfully. And hey, what better day for Sparks Fly to be released than the Fourth of July, with all those fireworks?
Labels: blog updates